Is a vector necessarily changed if it is rotated through an angle?

No, it is not possible to obtain zero by adding two vectors of unequal magnitudes.
Example: Let us add two vectors

B→of unequal magnitudes acting in opposite directions. The resultant vector is given by

R=A2+B2+2ABcosθIf two vectors are exactly opposite to each other, then

B→are equal (A = B) and both are acting in the opposite directions.

A, →B→ and C→, given these three vectors make an angle of

120°with each other. Consider the figure below: 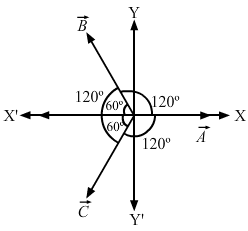 Lets examine the components of the three vectors.

Does the phrase “direction of zero vector” have physical significance? Discuss it terms of velocity, force etc.

A zero vector has physical significance in physics, as the operations on the zero vector gives us a vector.
For any vector

i,^-i^ and j^along the positive x-axis, negative x-axis and positive y-axis, respectively. Consider the figure given below: 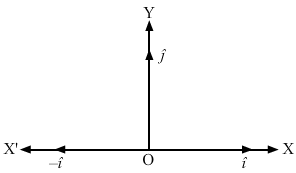 The magnitudes of the three unit vectors (

i,^-i^ and j^) are the same, but their directions are different.
So, the resultant of

Can we have physical quantities having magnitude and direction which are not vectors?

Yes, there are physical quantities like electric current and pressure which have magnitudes and directions, but are not considered as vectors because they do not follow vector laws of addition.

Can a vector have zero component along a line and still have nonzero magnitude?

Yes, a vector can have zero components along a line and still have a nonzero magnitude.
Example: Consider a two dimensional vector

Let ε1 and ε2 be the angles made by

-A→make the angles ε1 and ε2 with the X-axis, respectively, then ε1 is equal to ε2 as shown in the figure: 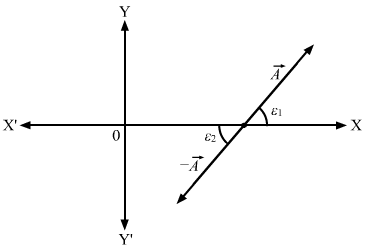 Here, tan ε1 = tan ε2
Because these are alternate angles.
Thus, giving tan ε does not uniquely determine the direction of

Is the vector sum of the unit vectors

No, the vector sum of the unit vectors

j→is not a unit vector, because the magnitude of the resultant of

Magnitude of the resultant vector is given by
R =

12+12+cos90°=2Yes, we can multiply this resultant vector by a scalar number

No, we cannot have

A→×B→=A→·B→with A ≠ 0 and B ≠ 0. This is because the left hand side of the given equation gives a vector quantity, while the right hand side gives a scalar quantity. However, if one of the two vectors is zero, then both the sides will be equal to zero and the relation will be valid.

A→×B→=0, then both the vectors are either parallel or antiparallel, i.e., the angle between the vectors is either

Both the conditions can be satisfied:
(a)

A→=B→,i.e., the two vectors are equal in magnitude and parallel to each other
(b)

A→≠B→, i.e., the two vectors are unequal in magnitude and parallel or anti parallel to each other

B→=kA→by putting the value of scalar k as

B→A→= k, because a vector cannot be divided by other vectors, as vector division is not possible.

(d) it is slid parallel to itself.

A vector is defined by its magnitude and direction. If we slide it to a parallel position to itself, then none of the given parameters, which define the vector, will change.

Let the magnitude of a displacement vector (

A→) directed towards the north be 5 metres. If we slide it parallel to itself, then the direction and magnitude will not change.

1,2 and 1 may represent the magnitudes of three vectors adding to zero.For example one of the vector of length 1 should make an angle of

225∘with x axis. The third vector of length 2 should lie along x axis.

A→ and B→makes an angle α with

The resultant of two vectors is closer to the vector with the greater magnitude.
Thus, α < β if A > B

All the given options are incorrect. The component of a vector may be less than, greater than or equal to its magnitude, depending upon the vector and its components.

B→points towards the north. The vector product

(a) along the west

A→×B→will point towards the west. We can determine this direction using the right hand thumb rule.

πr2On putting the values, we get:

A→(b) It is possible to have

(b) It is possible to have

C→=A→+B→Here, the magnitude of the resultant vector may or may not be equal to or less than the magnitudes of

B→or the sum of the magnitudes of both the vectors if the two vectors are in opposite directions.

A-B(c) C must be greater than

A-BHere, we have three vector A, B and C.

The x-component of the resultant of several vectors cannot be greater than the sum of the magnitudes of the vectors.

The magnitude of the vector product of two vectors

The magnitude of the vector product of two vectors

B→makes an angle of 110° with the X-axis. The magnitudes of these vectors are 3 m and 4 m respectively. Find the resultant. 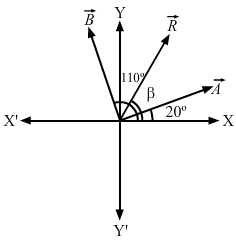 From the above figure, we have:
Angle between

A→ and B→be the two vectors of magnitude 10 unit each. If they are inclined to the X-axis at angle 30° and 60° respectively, find the resultant. 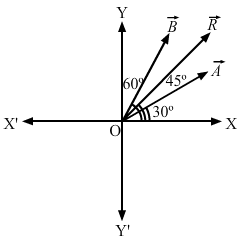 Let β be the angle between

∴ The magnitude of the resultant vector is 17.3 and it makes angle of 45° with the X-axis. 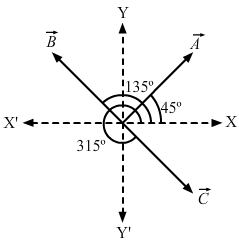 ∴ The magnitude of the resultant vector is 100 units and it makes an angle of 45° with the x-axis. 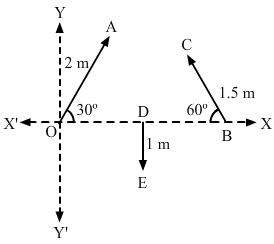 First, let us find the components of the vectors along the x and y-axes. Then we will find the resultant x and y-components.

Two vectors have magnitudes 2 unit and 4 unit respectively. What should be the angle between them if the magnitude of the resultant is (a) 1 unit, (b) 5 unit and (c) 7 unit.

Let the two vectors be

(b) If the resultant vector is 5 units, then

Hence, the angle between them is 90°.

(c) If the resultant vector is 7 units, then

Hence, the angle between them is 0°.

The displacement of the car is represented by

⇒θ=tan-1 112Hence, the displacement of the car is 6.02 km along the direction 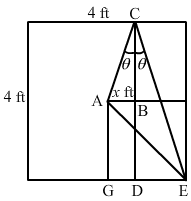 Consider that the queen is initially at point A as shown in the figure.
Let AB be x ft.
So, DE = (2

A mosquito net over a 7 ft × 4 ft bed is 3 ft high. The net has a hole at one corner of the bed through which a mosquito enters the net. It flies and sits at the diagonally opposite upper corner of the net. (a) Find the magnitude of the displacement of the mosquito. (b) Taking the hole as the origin, the length of the bed as the X-axis, it width as the Y-axis, and vertically up as the Z-axis, write the components of the displacement vector.

Displacement vector of the mosquito, 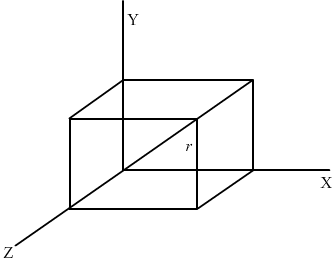 (a) Magnitude of displacement

a→is a vector of magnitude 4.5 units due north. What is the vector (a)

a→is a vector of magnitude 4.5 units due north.

-4a→is a vector of magnitude 6 units due south.

Two vectors have magnitudes 2 m and 3m. The angle between them is 60°. Find (a) the scalar product of the two vectors, (b) the magnitude of their vector product.

Let the two vectors be

(a) The scalar product of two vectors is given by 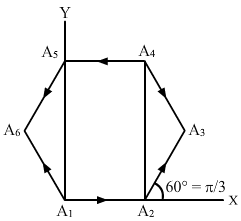 According to the polygon law of vector addition, the resultant of these six vectors is zero.
Here, a = b = c = d = e = f (magnitudes), as it is a regular hexagon. A regular polygon has all sides equal to each other.
So, 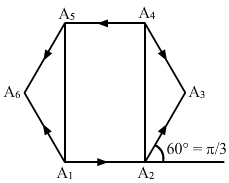 Note: Similarly, it can be proven that

A→ and B→. This implies that it is also perpendicular to

A→. We know that the dot product of two perpendicular vectors is zero.
∴

A→×B→can be obtained as follows:

A→, B→, C→are mutually perpendicular, show that

A→, B→ and C→are mutually perpendicular. 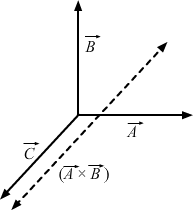 ∴ The angle between

C→×A→×B→=0However, the converse is not true. For example, if two of the vectors are parallel, then also,

So, they need not be mutually perpendicular.

A particle moves on a given straight line with a constant speed ν. At a certain time it is at a point P on its straight line path. O is a fixed point. Show that

OP→×ν→is independent of the position P.

The particle moves on the straight line XX’ at a uniform speed ν. 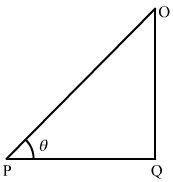 E→is along the X-axis and

B→along the Y-axis. In what direction and with what minimum speed ν should a positively charged particle be sent so that the net force on it is zero?

According to the problem, the net electric and magnetic forces on the particle should be zero. 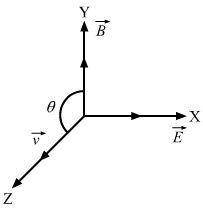 ν→ ×B→should be opposite to the direction of

ν→should be along the positive z-direction.

θ=90° and, thus, νmin=EBSo, the particle must be projected at a minimum speed of

Give an example for which

B;→ B→is along the west direction.
Also,

C→are along the south and north directions, respectively.

Draw a graph from the following data. Draw tangents at x = 2, 6 and 8. Find the slopes of these tangents. Verify that the curve draw is y = 2x2 and the slope of tangent is

Note: Students should draw the graph y = 2x2 on a graph paper for results.

To find a slope at any point, draw a tangent at the point and extend the line to meet the x-axis. Then find tan θ as shown in the figure. 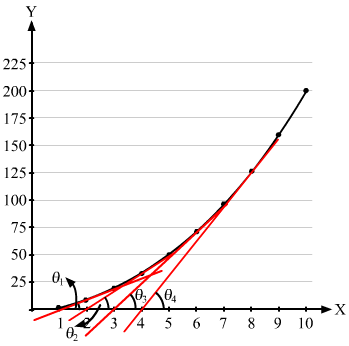 The above can be checked as follows:

A curve is represented by y = sin x. If x is changed from 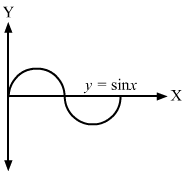 =-i0RC×e-t/RCOn applying the conditions given in the questions, we get:
(a) At

According to the question, we have: 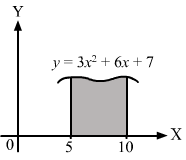 The given equation of the curve is y = sin x. 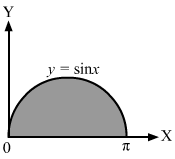 The required area can found by integrating y w.r.t x within the proper limits.

Find the area bounded by the curve y = e−x, the X-axis and the Y-axis.

So, the required area can be determined by integrating the function from 0 to ∞.

(b) Let us consider a small element of length dx at a distance x from the origin as shown in the figure given below: 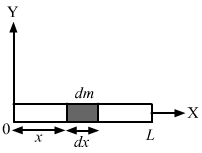 According to the question, we have:

On integrating the above equation, we get:

Changes in a function of y and the independent variable x are related as follows:

⇒y=x33+c, where c is a constant
∴ y as a function of x is represented by

A metre scale is graduated at every millimetre. How many significant digits will be there in a length measurement with this scale?

The length and the radius of a cylinder measured with a slide callipers are found to be 4.54 cm and 1.75 cm respectively. Calculate the volume of the cylinder.

The thickness of a glass plate is measured to be 2.17 mm, 2.17 mm and 2.18 mm at three different places. Find the average thickness of the plate from this data.

Consider the figure shown below: